All of us have that one card (perhaps more) that we regret parting ways with. Sometimes our regret comes in the form of sentimentalism. Others have a hard time finding a replacement due to the card’s scarcity, while the rest of us are faced with not wanting to fork out the cold hard cash that is needed for replacing a card.

One such card for me is the 1980 Topps Rickey Henderson Rookie Card. I had this iconic card during my childhood but eventually gave it to my younger cousin (along with every other piece of cardboard I owned) once I hit those teenage years. Since then- or at least since re-entering the hobby in 1991- I have found myself wanting to buy another Rickey Rookie, but have always balked because of the higher prices.

The good news, of course, is that many of the key cards from the pre-junk/junk wax area have seen their prices drop in recent years, making them far more affordable for those of us on a tight card budget. And that was welcome news as I took on took on the task of putting together a set of 1980 Topps baseball.

After purchasing a starter lot, I’ve been slowing piecing together this personal favorite. At one point this summer, I thought I might have a chance to work a trade for a Henderson. It didn’t pan out and I put the idea on the back burner for a while. A recent email changed that, however, and a click of the mouse sent me to the store link of  DJ’s Sportcards in Renton, Washington.

I had visited DJ’s while in Seattle for a Van Halen concert a few years ago. My buddy was still working when my flight arrived, so I picked up my rental car, searched for some LCS on Google, and headed over to Renton. The shop itself had a nice selection of new and old, autos, as well as other stuff. While there, I signed up for their email list, which is sent out each Friday and usually features some of their most recent acquisitions. Don- the owner- has adopted quite a few kids from other countries and the newsletter will occasionally have updates on the latest news with (or addition to) their family. Anyway, the most recent newsletter featured an ’80 Topps Henderson in EX condition for $19 shipped. I decided to click the link while not getting my hopes up. To my surprise, the card was still available and I decided this was the time to buy. Not only was the price right, but I really wanted to give this man my business. I’m an advocate of adoption and if this man’s family is willing to open up their home and their lives to children who are in need of love and a chance at a better life… then I’m happy to spend my money there and help them in meeting the needs of these children.

I *might* have been able to pick one of these up for a little cheaper on eBay, but all things considered, I think I got quite a deal for this card of the Man of Steal.

It’s not very often that we get card shows in my area, let alone two within a week of one another- but that is exactly what happened the first two weekends of August.

The first show was my re-entry into the card show circuit (as a seller, anyway). It had been probably 16 or 17 years since I had set up at a show, so I was pretty excited leading up to that day. In fact, I had spent a lot of my evenings in June and July purchasing, organizing and pricing cardboard. So how did it go? To put it bluntly, sh****.

In hind sight, I should have looked a little closer at the calendar. The first show took place as one popular rodeo had just ended and another was about to begin. There was also the county fair that just finished and the state fair on the horizon. Let’s see… school about to begin…last minute vacations….you get the picture.

Foot traffic was horrible (and that’s an understatement!)- worst I had ever seen at a show-and the only thing that allowed me to recoup my table fee ($35) was giving someone a great deal on 3 autos (for a total of $25). I had forgot that Boise is a football market, and for someone who had very little football cards… yikes.

But some good came from all that free time I had: I was able to talk shop with a couple of guys I’ve bought from over the years and was also able to trade with them this particular day. 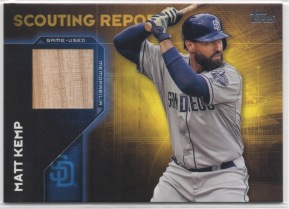 One of the men had bought a 2016 Topps 2 Hobby Box while there and pulled this Matt Kemp Scouting Report card. Nothing special- but he was needing some singles for the set he was putting together and I was able to fill them for him. This will go with the master set I’m building.

The Griffey card… I had one at one time but sold it at a show back in 1993. I was preparing to purchase my first house and as a young, single man who didn’t make a whole lot of money I was needing to liquidate some of my cards in order to come up with cash for a down payment. Junior’s iconic Rookie Card was part of a rookie lot that I sold to one buyer. Back then it was in the, what- $150 range? I got this for a little cash and some trade bait.

The next weekend (which happened to be National Baseball Card Day) I attended another show. This was a more unique setting, though. There’s a card shop which is actually a co-op and they hosted a show inside their building. One dealer (one of the shop owners) had an 80% table and I was able to pickup the following cards for some of my sets.

The Brett second-year card is badly miscut but it works well as a filler for my set. And the price was certainly right.

As always, thanks for reading!